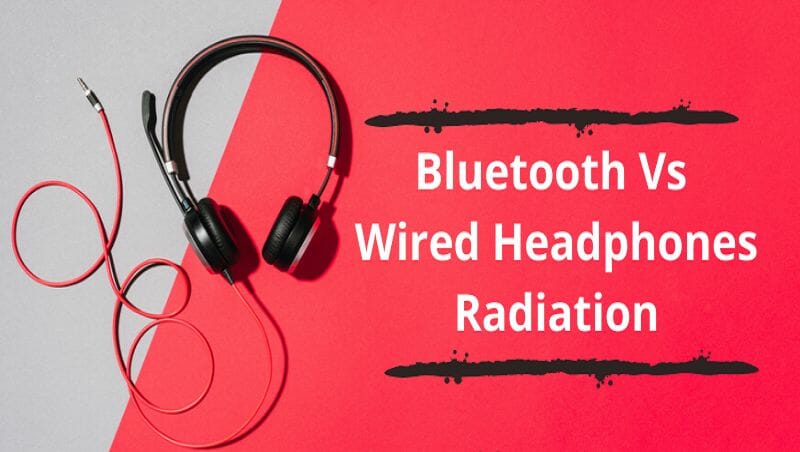 The EMF and RF radiation produced by Bluetooth devices are carcinogenic in nature. In scientific research and case studies, RF radiations are linked with the diseases like DNA damage, cancer, infertility, and male sterility. However, Bluetooth headsets and WiFi networks emit low-power non-ionizing electromagnetic radiation.

This radiation is harmful only when the exposure is highly prolonged, and the radiation is intense. Therefore the risk of cancer or DNA damage is not much greater, but the overuse of Bluetooth headphones can cause insomnia, headache, and upper limb pain.

Wired headphones do not emit EMF or RF radiation. It makes them much safer than Bluetooth headphones. However, corded headphones can transmit a large amount of radiation to the body. Since corded headphones are in direct contact with your ears and electronic devices like cellular phones, they act as an antenna for the radiations emitted by your cell phone.

The metal inside the wires conducts intense radiation from the connected device. This radiation directly approaches your ear canal and then reaches the head. The head and ear are more sensitive than other body parts, and the risk of damage is higher.

Now we know that despite emitting zero radiations, wired headphones can transmit harmful radiation to your body from the electronic device they are connected to. To understand the effect of transmitted radiation by wired and Bluetooth headphones, we need to understand the SAR.

SAR refers to the Specific Absorption Rate. It is a term used to measure the amount of radiation our body absorbs from cellular devices. The SAR value depends upon many factors like sensitivity of body parts, distance from the cellular device, and conducting medium.

Bluetooth headphones reduce the SAR value by up to 34 times. The reduction in SAR value is much more than corded headphones. This is because Bluetooth technology uses the radio signal as a transmission medium. Radio signals carry minuscule power compared to metallic wire and do not transmit intense radiations to the body.

How Can We Reduce The SAR value with Wired Headphones?

Ferrite beads are cylindrical beads that are attached to the wires that come with electronic devices like mobile and laptop chargers. These beads are clipped with wires to regulate the electricity flow through the wires. They block the high-frequency surges that can damage the electronic circuit if not blocked.

Similarly, ferrite beads block the high-frequency radiation and prevent the wires from turning into a highly conducting antenna. They can significantly reduce the intensity and amount of radiation transmitted through the earphone’s wires.

Ferrite beads allow the radiation with a lower frequency but stop the higher frequency radiations harmful to the human body. So the wired headphones featuring ferrite beads can reduce the SAR value up to 70 times.

Bluetooth Vs. Wired Headphones, Which One To Buy?

Do wired headphones give off radiation?

Is radiation from Bluetooth headphones harmful?

Bluetooth headphones give off RF radiations having the same frequency as the radiations emitted by microwave ovens. However, the radiation has low wattage, low power, and is non-ionizing in nature. According to the Food and Drug Authority, these rays are not carcinogenic in nature. However, prolonged and continuous exposure to these radiations can cause headaches, insomnia, neck pain, and upper limb aches.

Are wired headphones bad for your brain?

Wired headphones act as a high-frequency antenna and conduct intense radiation emitted from the electronic devices they are connected to. These radiations are absorbed by our ear canal and head and can cause serious health issues like cancer and DNA damage.

What are the safest headphones?

A wired headphone with ferrite earbuds is the safest earphone you can have. A wired headphone increases your distance from your phone and reduces the impact of radiation emitted by electronic devices. Plus, the ferrite beads block the harmful radiation that is conducted through the metallic wires.

Are headphones bad for your brain?

Headphones are not really bad for your brain since they keep the radiating electronic devices away from you. However, bad habits like listening to loud music and prolonged use of headphones can cause headaches and insomnia.

What are the disadvantages of Bluetooth headsets?

Our discussion of “Bluetooth Vs. Wired Headphones radiation” reveals that none of the options are risk-free. However, you can make both these options safe in various ways. For example, radiations emitted by Bluetooth headphones are low-power and non-ionizing in nature.

They are harmful only when the exposure is long and continuous. It means we need to change our habits to protect ourselves. If we talk about wired headphones, they’re safer than Bluetooth headphones. We can make them even safer by clipping ferrite beads on the wires.

Related Posts:
Recent Posts
Disclaimer
Headphonesavvy.com is a participant in the Amazon Services LLC Associates Program, an affiliate advertising program designed to provide a means for sites to earn advertising fees by advertising and linking to Amazon.com. We may earn commission if visitor purchases from Amazon through our links. As an Amazon Associate I earn from qualifying purchases.
Site Navigation
How To Contact

Email us at: admin @ headphonesavvy.com